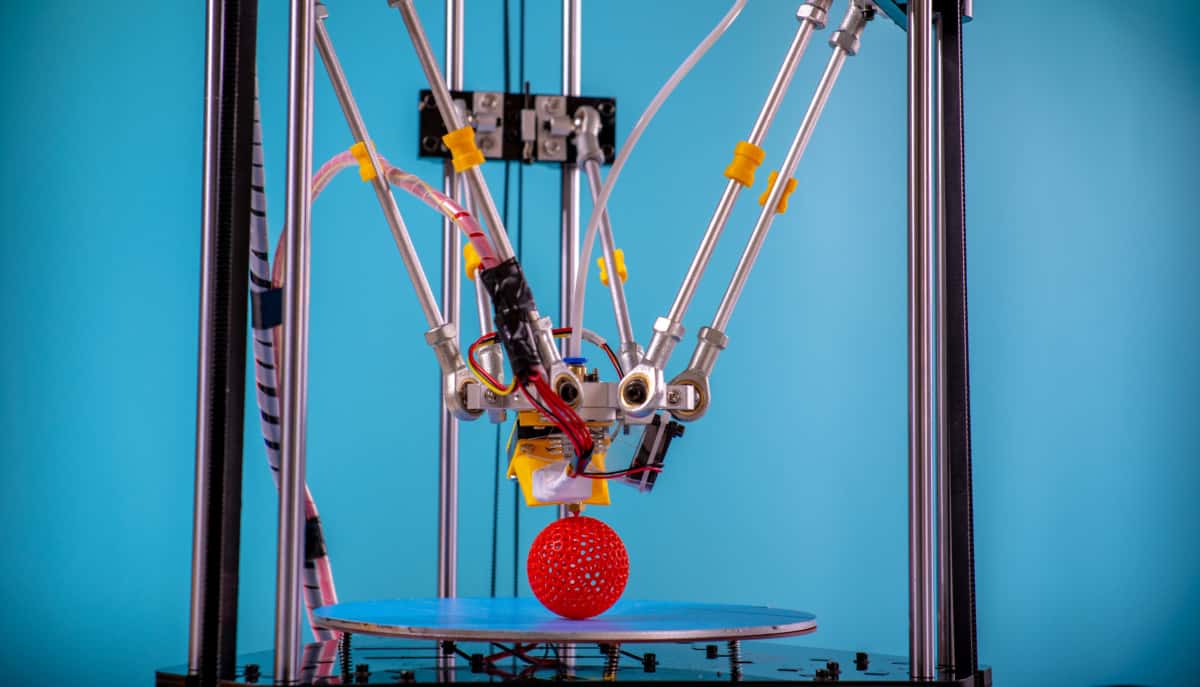 When it comes to 3D printing, manufacturers come up with their own unique technology to get better prints. Two of the most popular desktop 3D printing styles are Cartesian and Delta. Delta 3D printers use a unique navigation system to locate the print head within the 3D space. These printers consist of three arms that are connected in the middle and move vertically on rails to guide the print head to the precise location of the print.

Let’s delve deeper into how the system works and what differs it from the Cartesian printing style.

Why Do Printing System Designs Matter?

The 3D printing market has become quite competitive over the last decade. Advances in technology and software have made 3D printers really useful for tinkerers and inventors. The massive interest from buyers brought many new companies and innovators into the sector offering their unique printing technology.

Different brands offer their own 3D printing technology and unique capabilities that suit the types of prints you want to make. This is why it is important to understand which printer is most suitable for your project needs.

The two types of 3D printing systems that have been adopted by most manufacturers are the: Cartesian and Delta systems. The biggest difference between these two systems is the method in which the printing head moves to create prints.

How Does the Cartesian Printing System Work?

When people think of 3D printers, they usually think of Cartesian-style FDM printers, such as the Ultimaker 2 or Prusa. That’s no surprise, since they’re by far the most common type of 3D printers on the market.

These systems are based on the Fused Deposition Modeling (FDM) technology. This is a patented, Strata-sys additive printing method that allows rapid model prototyping. The process is also known as Fused Filament Fabrication (FFF) 3D printing. 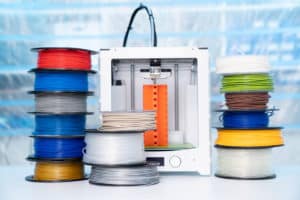 With the FDM 3D technology, the deposit nozzle on the printer is attached to a horizontal bar over the platform bed. Generally, the nozzle moves in two directions while the platform at the bottom moves in the third direction to create a 3D print.

Thermoplastic material is heated to its melting point and then extruded, layer by layer on to the prototype as the bedding platform lowers or the horizontal bar rises. This is what creates the three-dimensional object.

Each layer deposited on the print is created by the movement of the print bed and the nozzle across the bar. Once a layer is completed, the base is lowered slightly or the deposit bar rises up a little to make room for the next layer of plastic.

Once an object comes off the FDM 3D printer, its support materials can be removed.

How Does the Delta Printing System Work?

The Delta 3D printing system is also based on the Cartesian coordinate system. However, it does not use the linear motion-tracked deposit system similar to regular Cartesian printers.

This platform is based on three arms, where each of them consists of a parallelogram. This allows the arms to slide up and down simultaneously or one at a time.

The arms can move from one X or Y point to another, but do this by changing the angles of their parallelograms. The arms of the Delta 3D printer are all attached to a fixed platform at the center. The deposit tube and nozzle are also connected to this platform.

All of the mechanics that drive the motion of the printing arms are located in this central platform. This design allows the print head of the Delta 3D printers to be significantly lighter. This helps reduce weight and inertia as it prints.

If you print rectangular objects on a Delta printer, the size will need to be rather small in comparison to a Cartesian 3D printer. It is particularly limited for creating flat prints like car models and animals etc.

The printer has its benefits as well. The 3D Delta printer’s design allows you to build tall objects with great finesse. The highest point of your prints can be made exceptionally accurate with this model.

It is also fairly easy to make your prints bigger, especially in height, due to its design. The printer is great for creating objects like vases, rockets and tall action figures.

The Delta printer also uses few parts and its design is less complicated than a Cartesian printer. This helps reduce maintenance and price. The printer will also suit you if you do not have or need a lot of horizontal space for your prints.

If most of your prints will need to build a lot of layers on top of each other (vertical), then you should definitely consider a Delta 3D printer.

Differences between the Delta Printer and the Cartesian Printer

Both the Cartesian and Delta style 3D printers are based on FDM technology. They have the same underlying printing method. Their main parts, such as the extruder, print bed and motors are also similar.

Even the filament used in Delta printers is similar to the Cartesian models. The most common filaments include PLA, ABS, flexibles and other materials.

The end result with both types of models is similar when you print small objects. If you saw a completed prototype, you wouldn’t be able to tell for sure whether it was built with a Delta 3D printer or a Cartesian model.

However, that is where the similarities end.

The main difference between the two styles is the way in which the extruder platform moves. For Delta models, it is arranged at the center of the three arms while the Cartesian printer puts the prototype under the platform arm.

In most cases, the bed of a Delta printer is circular instead of rectangular, and it remains fixed in place. For many Cartesian models, the print bed also moves by either lowering as you print or with a back and forth movement. The Delta model print bed does not move.

While the average bed size is pretty small for Delta models, the build-height is generally much taller than most Cartesian printers. This allows you to print tall objects as well. A typical Delta 3D printer has a print space that looks like a tall cylinder.

Lastly, Delta printers allow you to build prototypes faster. The heavy motors and extruders are fixed on the sides and at the top. The tool head itself is built to be very lightweight and moves with minimal power. This allows the printer to maintain a high level of accuracy at high speeds. They also have a cleaner finish at the top than Cartesian models.

Cartesian and Delta models are not the only types of 3D printers around. Other 3D printer designs include Scara and Polar styles that are popular with manufacturers.

My Other 3D Printer Articles You May Enjoy

Best Glow in the Dark Filament for 3D Printers

Overall, the Delta 3D printing technology is just one of the several depositing mechanisms developed for FDM printers. It lacks the overall versatility and wider applications that you get with Cartesian 3D printers.

However, the model does serve an important purpose. It is faster and tends to be more accurate for tall, narrow objects. It is also lightweight and easier to maintain.

Busy 3D printing professionals understand that printing speed matters when they are working on several prototypes with a short deadline. The Delta 3D printers can give you very high printing speeds with a great quality finish, as long as your prints are not too big or wide.

If you want good-looking, accurate 3D prints made quickly, then think about getting a Delta 3D printer. If you have more questions or want to add something let us know! 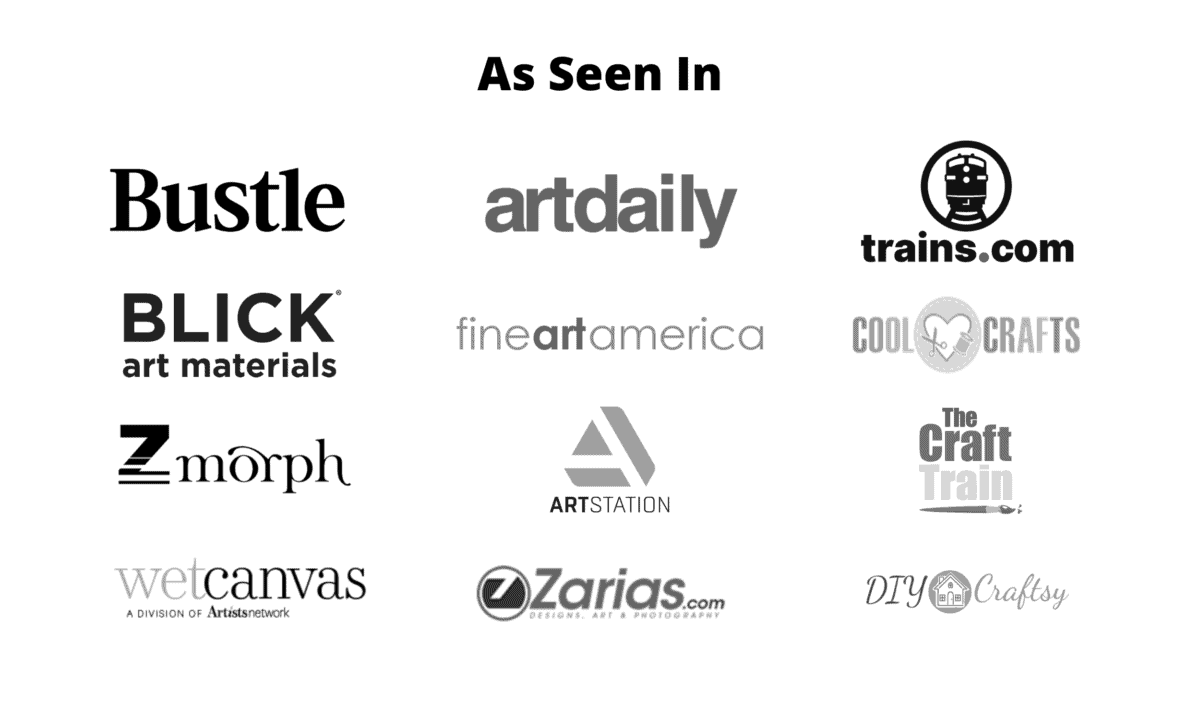